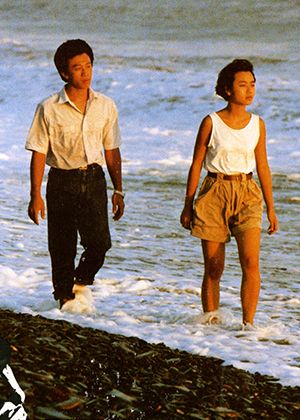 Adapted from HSIAO Sa’s short story Siao Ye, A-cheng moves to the north to work at a western restaurant. He hits on customer Siao-huei and the two of them sleep together. A-cheng was raised by his mother since his father died when he was little. Siao-huei has a tough past and now works as a prostitute. Both of them lean on one another and become a couple. However, A-cheng believes the words of a dishonest friend who escapes from prison and becomes indebted. To repay his debts, Siao-huei has to resort to prostitution again. It never rains but it pours. A-cheng kills a person to save Siao-huei. The two go on the run and get cornered by the trailing police and gangsters.

The theme song is taken from a classic Taiwanese song “Hometown at Dusk“, covered by a famous singer Jody CHIANG in the film, which is about those who leave town suffer from homesickness and yearning. The song resonates with the lower class in the city, which is presented by director WAN Jen. He introduces complex issues such as the sex industry, illegal guns, the difference between city and country, regional identities, etc. A-cheng and Siao-huei escape along the coast to the south and visit the Lyu Siang-jhen Shop in Yuanli, the Dajia Jenn Lann Temple and the beehive fireworks in Yanshui. It is a constant push-and-pull between leaving and returning home. the film has some timeless quotes such as “The price for everything is going up.” A-cheng once sighs, “Life is still quite beautiful. Sadly for us, it’s too short.” The sense of powerlessness at a young age is reminiscent of the contemporary music by indie band ""EggPlantEgg"".